What does Zen mean? Zen grew on the grounds of the Japanese culture. This is how it has gotten its form as we know it today. But in fact Zen is neither Japanese, nor Indian, nor European. Zen is free of any culture and is over and beyond any cultures.

Zen leads Buddhism back to its core. Zen is also the essence of Buddhism or of the teaching of Buddha. Zen is Zazen. It is senseless to try to approach the path of the Buddha theoretically. Zen (teaching of the Buddha) is practice.

Today Buddhism has several faces: Mahayana, Hinayana, Korean and Japanese Zen, Tibetan Buddhism, etc. This is due not only to the differing stresses of certain aspects of the path discovered by the Buddha, but also to the merging of other religions and to cultural influences.

A definite yes and no. On the path of the Buddha you deal with the problems of human existence. Birth, sickness, old age and death. This is the heart of any religion. On the other hand, there is no god in Buddhism, which is a defining feature of a religion for many people.

Who was Buddha Shakyamuni?

Buddha Shakyamuni lived about 2500 years ago in northern India. He was born in Lumbini, near the city of Kapilavastu. He was the son of a Raja (a sovereign who was only subject to the king) and a descendent of the Shakyer. His name war Siddharte Gautama. Even though he over-provided for materialistically he had a strong feeling of discontentment in his life. And so he left his family, became homeless and searched for the liberation of the mind through ascetic practices.

Weakened almost to death by these methods, he finally practiced Zazen by himself and awoke to the great path. From this point on he was named the Buddha (= the fully awakened). He preached and practiced the path another 40 years, until he died at the age of 80 in Kushinagara.

Who can participate in the practice in our Dôjô?

Anyone who is willing to engage in the path of Zen.
There are no restrictions pertaining to religion or worldviews. After an introduction you can come to any of the sittings. Either you come as a “guest” and pay the guest fee for every sitting or you become a member (monthly fee).

Who runs the Dôjô? 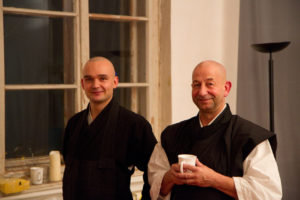